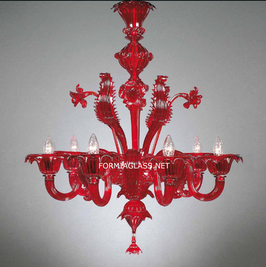 Murano chandeliers are the excellence of the glassblowing masters

The craft of the Murano glass master specialising in chandeliers represents an excellence of craftsmanship.   Using a simple iron rod, the master takes a blob of glowing glass paste from the pot into the fiery furnace.   Glass preparation is slow and the process changes depending on the type of glass desired: for ordinary glass, the melting must reach 1400/1600 degrees centigrade; while for crystals, potassium carbonate is used instead of calcium carbonate.  Lead, aluminium, zinc, barium and carbon dioxide are added to increase rigidity and prevent the glass from becoming brittle over time.

The glass master has no model in front of him, only his skill and imagination help him.  He puts the long tube in his mouth and with the energy of his lungs, the shimmering glass bolus swells, bends, expands and takes the shape he wants.  A spatula, tongs and a pair of scissors are some of the tools he uses to crush, flatten, cut, pull, curve and twist.    After patiently putting the glass through a large number and variety of operations, the work of art leaves the master's hands perfect and is placed with all the other works of the day in a long cooling tunnel called an 'ara' before it can leave the factory.

But the true glory of blown and transparent glass, Venetian 'crystal' came only between the end of the 15th century and the beginning of the 16th century.  The most beautiful blown glass of all was produced by the Murano factories during this period and can be seen in public and private collections in Italy and abroad, and can be seen reproduced in paintings by Titian, Veronese and Bonifazio de' Pitati.

The following are just a few, nobody mind me, the historical families of Murano chandelier glassblowers are: Barovier, Toso, Ferro, Salviati, Fuga, Seguso, Radi, and all the furnaces that opened, each a true Murano chandelier factory.